These images are portraits of the perpetrators of the ten most fatal school shootings since the Columbine massacre in 1999. Five of the shooters are from the USA, two from Germany, two from Finland and one from Brazil.

School shootings are rare, but repetitive phenomenon, with the perpetrators sharing significant similarities. Research shows that school shootings are acts motivated by individual troubles rather than political motives, and they are never totally impulsive acts. Rather, the shooter, a young man who is a student or former student of a particular school, will slowly become excluded from his peers. Often he faces bullying at school. His family circumstances may be normal but the young man himself feels alienated. There is usually some sort of serious drawback in his personal life and he feels rejected. His final attempt to redeem his position as an alpha male is to commit an act so horrific in scale that it will give him eternal fame.

The treatment of school shootings in the media has both positive and negative effects. On the one hand, the dramatic stories can construct a myth around the shooter making him the idol he wished to be, encouraging copycat behaviour and celebration of violence. On the other hand, media presentations of violence people can confront the horrible act from a safe distance.

As Susan Sontag reminds us, photographs of agony not only remind the viewers of the explicit issues presented in the photographs, but also of the existence of a culture of violence in general. Connected with ethical considerations, images of violence can invite viewers “to pay attention, to reflect, to learn and to examine” not only the images and their aesthetics, but also the culture of violence they depict and of which the viewer is unavoidably a part.

Portraits of American school shooters are constructed from photographed clippings from American newspapers and Internet news. Similarly, the portraits of Finnish school shooters are constructed from Finnish media, the German portraits from German media and the Brazilian portrait from Brazilian media. All of the appropriated articles are gun and shooting related, and each portrait contains over a thousand different news headlines. Thus this series is inherently multilingual and multicultural despite the singularity of each image and event, alluding to the social connectedness that these young men have through the Internet. Through social media and other web-based practices these shooters constitute a kind of imagined community and common culture that this series touches with photographic means. 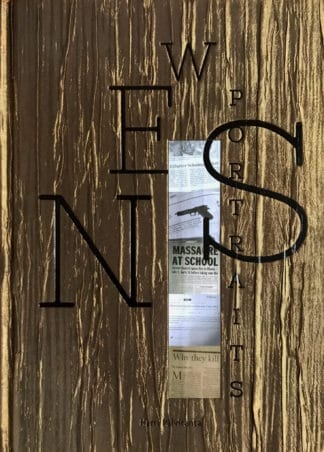