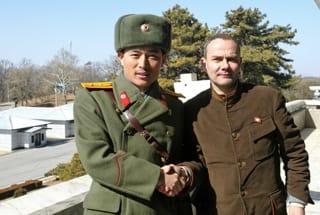 The Democratic People’s Republic of Korea (DPRK), or North Korea, has been called the Hermit Kingdom, as it is one of the most reclusive states in the world. North Korea’s citizens are not allowed to travel abroad, there is no Internet connection to the outside world, and the flow of information is almost completely controlled by the government.  This exhibition will be divided into two main sections: one showing the government’s official version of North Korea, while the other offers the alternative view of the country.  Imagery distributed through official channels, such as the country’s press agency KCNA, which is based in Japan, and those photographed by tourists on state-controlled tours will offer an official view. These official images will be juxtaposed with a non-controlled stream of images coming out of the country: photographs produced by international photojournalists from within the nation, and international artists using photography and video to directly address North Korea. North Korean Perspectives is organized by Europe-based independent curator Marc Prüst in collaboration with MoCP’s Executive Director Natasha Egan.  the link: http://www.mocp.org/exhibitions/2015/07/north-korean-perspectives.php

Pierre de Vallombreuse follows the life of a small community...